Citing new estimates of the extent of substance abuse among welfare recipients, the authors suggest that policymakers and analysts have likely overstated the contribution of substance dependence to welfare receipt.

The authors note that while substance use, abuse, and dependence are barriers to self-sufficiency, so are poor education, lack of transportation, physical and mental health problems, and other difficulties that are more common than substance dependence among welfare recipients.

The authors stress the need for comprehensive services to address the multiple barriers faced by the most disadvantaged welfare recipients.

Welfare reform, the 1996 Personal Responsibility and Work Opportunity Reconciliation Act (PRWORA), redefined the goals and daily operation of cash assistance. This law transformed the traditional entitlement to cash welfare under Aid to Families with Dependent Children (AFDC) into a transitional program, Temporary Assistance to Needy Families (TANF), which requires most recipients to work after two years of receiving assistance, or, at state option, even earlier, with few exceptions. After 60 months of receipt during a lifetime, a recipient is ineligible for federally-funded cash benefits.

The welfare reform debate and its aftermath generated substantial discussion about the potential connection between substance abuse and welfare receipt, and about the role of substance abuse in recipients’ ability to leave welfare for work. This was a new development. The primary controversy in the welfare reform debates of the 1980s and early 1990s was the extent to which jobs were available for recipients as opposed to the extent to which recipients were “choosing welfare and rejecting available jobs.”1 The 1996 Act resolved this debate by requiring most recipients to work, although states have some discretion in making a limited number of exemptions from the work requirements.

Several provisions of the 1996 law, and related measures, were targeted at those who use and sell illegal substances. Section 902 of the Act authorized states to use chemical testing to detect substance use among TANF applicants. About a dozen states have provisions allowing drug testing of welfare recipients under certain circumstances. Michigan is the only state that legislated suspicionless, population-based testing of recipients. However, Michigan’s policies have faced continued legal challenges. A federal appeals court halted testing in mid-2003 after an injunction stopped its implementation after only a month of operation.

The 1996 Gramm Amendment imposed a lifetime ban on the receipt of food stamps and TANF by those with felony convictions for illegal drug possession, use, or distribution. Other programs, such as “one strike and you’re out” rules defined by the Department of Housing and Urban Development, allow the eviction of public-housing tenants involved in drug-related crimes. Congress also limited the ability of substance users to obtain federal disability payments for drug-related ailments. In 1996, more than 200,000 individuals received Supplemental Security Income (SSI) or Social Security Disability Insurance (SSDI) payments based on diagnoses of “drug and alcohol addiction”. This classification was abolished and individuals for whom drug or alcohol addiction was the primary reason for their disability had their benefits terminated. Many individuals with terminated benefits could re-qualify for disability assistance based upon other conditions. However, existing studies indicate that many terminated beneficiaries did not return to the roll.2

As a result of these legislative changes, many researchers and program administrators began to declare that alcohol and drug abuse were widespread and would limit recipients’ ability to move from welfare to work. In 1995, one liberal advocacy group stated “welfare reform is doomed to fail if it does not address the needs of individuals with alcohol and drug problems”.3 Joseph Califano, former U. S. Secretary of Health, Education, Welfare, a prominent advocate for expanded access to treatment services, recently stated that “the bulk of mothers on welfare -- perhaps most -- are drug and alcohol abusers and addicts, often suffering from serious mental illness and other ailments.”4 An additional widespread concern was that drug use among welfare recipients puts children at risk for abuse or neglect.5

Because substance use is a covert behavior, its true prevalence among the general and welfare population is unknown. Most studies have relied upon self-reports. Deceptive or inaccurate responses are therefore important concerns. Studies also differ in the thresholds used to characterize substance use problems. Some focus on simple use; others use more stringent thresholds such as abuse or dependence. Due to differing definitions and data sources, published prevalence estimates of use vary widely, from 6.6 to 37 percent of those receiving public aid.6

Our estimates using data from the National Household Survey of Drug Abuse (NHSDA) indicate that 9 percent of welfare recipients in 1994 and 1995 were alcohol dependent and that 21 percent had used an illegal drug in the past year (mostly marijuana). (Figure 1) Excluding marijuana, 10 percent of recipients had used some other illegal drug during the past year, with 6 percent having used cocaine or crack.7 Only a small minority of recipients (about 4 percent) satisfied the diagnostic screening criteria for illicit drug dependence (i.e., their drug use impairs their functioning in significant ways).8 Our analyses also document that psychiatric disorders, especially major depression and post-traumatic stress disorder, are more prevalent than drug and alcohol dependence among welfare recipients. About 19 percent of recipients had at least one of the four psychiatric disorders measured in the NHSDA.

Illicit drug use and dependence are more common among women receiving welfare than among women who do not. Illicit drug use remains associated with welfare receipt even after controlling for race, educational attainment, region, and other potential confounders. If all welfare recipients were to stop using illicit drugs, however, the size of the welfare population would show little decline.9 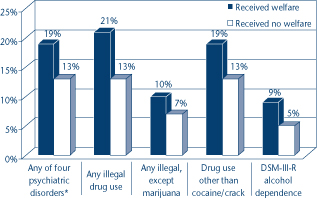 Substance abuse just one among barriers to self-sufficiency

Welfare-to-work initiatives implemented by the states, together with an economic boom that generated the lowest unemployment rates in three decades, contributed to rapid caseload declines from the mid-1990s up to 2001, a decline that has slowed but has yet not stopped. Nonetheless, many women who received benefits when welfare was reformed were not able to find steady employment and leave the rolls in the aftermath of reform. As a result, some analysts speculate that substance abuse is now more common among the remaining recipients and that substance abuse poses a greater problem today than it did prior to reform. The logic of this argument is credible: as caseloads have fallen, women with the fewest problems have left the rolls more quickly.

However, analyses using the NHSDA and the Women’s Employment Survey (WES), a panel survey of single-mother welfare recipients in an urban Michigan county, do not support these concerns.10 Although TANF recipients have become more disadvantaged along a number of characteristics related to health and mental health11, substance abuse and dependence is not a major contributor in defining the core group of recipients remaining on the rolls. NHSDA data in recent years indicate that the prevalence of illicit drug use among recipients has remained stable after welfare reform. Among WES respondents who received welfare in early 1997 and were still receiving benefits in late 2001, about 5 percent met the diagnostic screening criteria for drug dependence. In contrast, 22 percent met the diagnostic screening criteria for depression and 38 percent had physical limitations and self-reported “fair or poor” health. Private employers are allowed to test job applicant for drug use as a condition of employment. In the WES, about 36 percent of current and former welfare recipients reported that an employer had required them to take a drug test during the previous two years, but only 3 percent reported they had failed the drug test.

Such findings suggest that policymakers and advocates have likely overstated the extent to which substance abuse contributes to continuing dependence on cash aid. Yet there are still important reasons for concern. Substance users may be at greater risk for reaching their time limits or having their benefits reduced or terminated for non-compliance with work requirements and other mandates. WES respondents who report illicit drug use in multiple years are more likely to accumulate months on TANF, putting them at-risk for reaching the time limit.12 And, welfare agency staff in Utah found that substance use problems were twice as prevalent among non-compliant recipients.13

While substance use, abuse, and dependence are barriers to self-sufficiency, so are poor education, lack of transportation, physical and mental health problems, and many other difficulties that are more common than substance abuse among welfare recipients. To date, most welfare-to-work programs have stressed acquisition of job search skills and rapid employment. Because many low-income mothers experience skills deficits and personal problems, including substance use disorders, more comprehensive programs are needed to move and sustain the most disadvantaged recipients on a path to self-sufficiency.

Major funding for the National Poverty Center is provided by the Office of the Assistant Secretary for Planning and Evaluation, U.S. Department of Health and Human Services.

Any opinions, findings, conclusions, or recommendations expressed in this material are those of the author(s) and do not necessarily reflect the view of the National Poverty Center or any sponsoring agency.

© 2017 The Regents of the University of Michigan